We left our house at six o’clock yesterday morning to drive way out to Eastern Iowa for Bubba’s spelling bee. We dropped Stinky and Little One off with our wonderful, blessed, amazing, dear, sweet pastor’s wife, and then we headed east.

It was a long drive so early in the morning, even with the List to keep us company.

Bubba did have time to talk with his Grandma on the way there. She helped him practice a lot last weekend. She bribed him with pennies and he earned $1.33 from spelling words right. 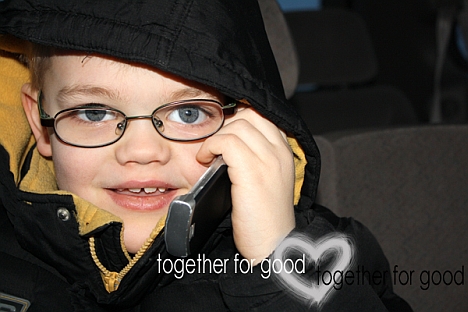 But most of the drive was spent practicing words. Hundreds of words. What an overwhelming task for a little guy. When we got to the church where the bee was held, I told him I was leaving the list in the van. We were done with it, for better or for worse.

Bubba got this rocking name tag to wear for the spelling bee.

Grade 1. A first grade boy who learned to spell literally hundreds of words that, though they seem easy enough to you and me, most kids his age would barely be able to sound out.

I am so proud of him.

When we got to the classroom where the first grade spelling bee was going to take place, we discovered that he was the only boy there. That didn’t really surprise me, since Bubs is kind of an unusual boy in that he can actually sit still for more than five minutes at a time. And it didn’t seem to bug him. Bubs gets along very well with girls. I think he has about 20 girls that are in love with him, but of course his heart belongs to S in the second grade at AWANA. 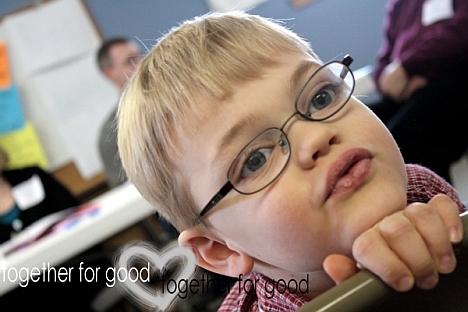 This was taken right before the spelling bee actually started. We weren’t allowed to take pictures during the bee itself in order to keep from distracting the kids.

Bubba was the second one out. He made it seven rounds. Every round we held our breath, and every round I swear he got a word that had tripped him up while we were practicing on the way there. Pail almost made me wet my pants, I swear, but he nailed it.

It was coming that finally did him in. All those rules about adding -ing to the end of a word get so confusing! He spelled c-o-m-m-i-n-g and then he was done. He immediately knew what he had done wrong, and he was embarrassed and came and buried his face in Art’s chest for a few minutes, but in the end he was just fine, spelling the words silently along with the little girls who kept going . . . and going . . . and going . . . for twenty-two rounds before there was finally a winner.

Twenty-two rounds. And in the last few rounds the last two standing were spelling words that were on the unpublished list– words they had never practiced. (We sat behind the winning girl during the awards ceremony and upper-grade spell-off. One of the words one of the older kids had to spell was sardonic and she spelled it on paper and showed it to her mom and she got it right. She was good.)

Once the winner was finally determined, the kids were released to the gym for lunch before the spell-off and awards ceremony. Bubba asked if he could go run around for a minute, and moments later we saw him at the other side of the gym chatting it up with a couple of girls.

(Sorry for the terrible picture. Like I said, he was all the way across the room. I don’t have a good zoom lens.)

Seriously! This boy is going to give us a lot of trouble in a couple years, I have a feeling.

But this is the little girl I’m rooting for. She was one of the first grade spellers and she was a riot. 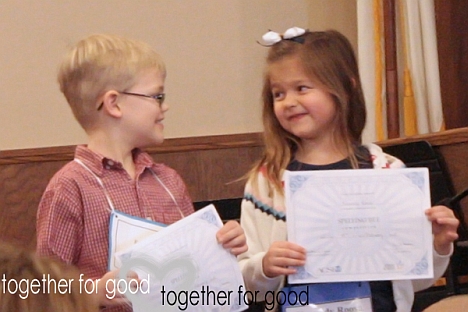 Seriously, every time she spelled a word right she turned around and gave her mom this huge excited smile. She was just all personality and so cute. We might have to send Ryan to a different school next year, I’m just saying. 😉

Bubs got this certificate for participating in the spelling bee. And yes, this was the best picture I could get. The boy was a bit excitable.

The best thing is that he had a good experience. He thought it was a fun day, and was talking about doing it again next year. He would have to be chosen by his teacher again, or win his class spelling bee, of course. But I was really glad that the experience left a good taste in his mouth.

Which, as you might imagine, made the long trip home even longer, but we did manage to get home eventually.

And we didn’t have to spell a single word for the entire drive.

15 thoughts on “The Spelling Bee”